Recap the very best moments from Week 1 in League Two! 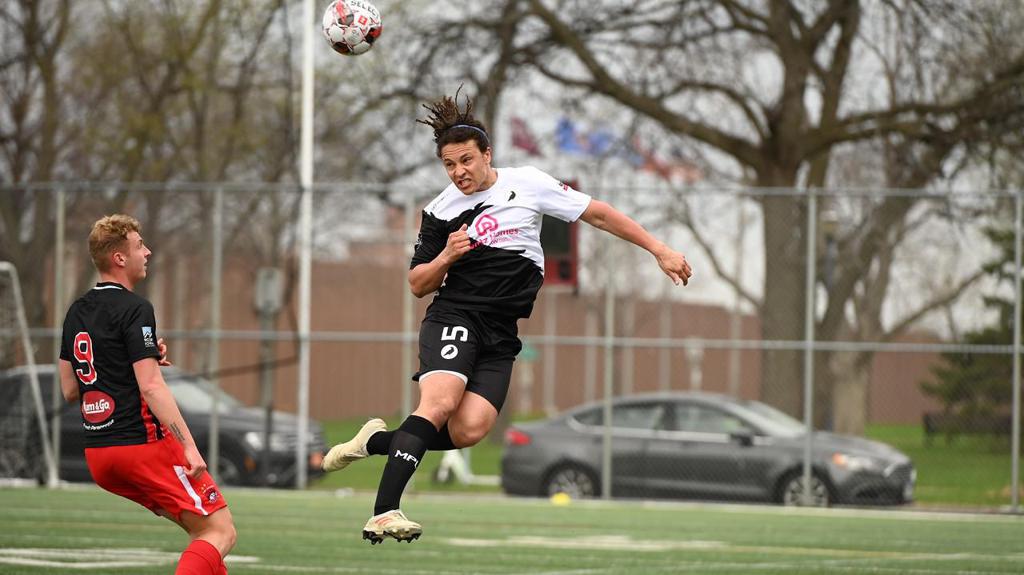 Week One of the 2022 League Two season is in the books, and it was one for the ages. Blistering free kicks, last-second heroics and several season debuts headlined a fantastic first week between the white lines. Relive all the best moments in our Weekly Notebook!

Our kickoff match was everything we could’ve hoped for. A stellar performance by NoVa’s KJ Nadeau saw him finish the day with a brace on only three shot attempts. Both those goals were put away in the first half, as the more experienced club coolly handled the League Two newcomers in the first 45.

At the 81-minute mark, Juan Ballas, the Cardinal number 9, pulled one back to close in on their in-state opponents. They looked like they would get another, as well. A flurry of Cardinals attacks had NoVa sweating – Cardinals had another threatening ball with a player clean through on goal, but NoVa keeper Calle Brown got big in his box and engulfed the ball, stopping it in its tracks.

The action wasn’t done there – NoVa insisted on putting the game away when Cardinals keeper Marc Bonnaire was caught off his line as possession changed hands at midfield. Illias Laghjibi unleashed a strike from half field that soared clean over Bonnaire’s head and into the back of the net. Despite a valiant effort from Commonwealth Cardinals, it’s NoVa that comes away with all three points.

Our top-billed match of the week lived up to the hype. Nearly 900 people showed up to Edor Nelson Field at Augsburg College to watch the defending champion Des Moines Menace take on League Two newcomers Minneapolis City. The scoreboard along the side of the pitch listed Des Moines as “Dennis” (The Menace), but the wit didn’t provide much protection against the preseason No. 2 team in League Two.

The action started at 26’ with a blistering 37-yard free kick from Ryley Kraft, which took a bounce off the turf about 3 yards out and sent Minneapolis keeper Martin Sanchez sprawling to no avail. Des Moines started the game patiently, but once they found the gaps in the Crows’ defense, they assaulted them repeatedly for the rest of the half.

In the second, the script looked like it may be flipped at the start of the frame. Aidan O’Driscoll won the ball in midfield and dribbled through a defender’s legs before roping a beautiful through ball over the top of the defense to the feet of Nils Gulbranson. Des Moines keeper Grant Makela came out of the box to contest the ball, and crashed into Gulbranson on the breakaway, drawing a straight red card.

Down to 10, it was no problem for the defending champions to continue slashing through the lines of the Crows’ defense. They stayed on the front foot, and at 68’, were rewarded when Eliot Goldthorpe cleaned up a saved shot and followed it into the net to double the Des Moines advantage.

The score would hold, and the Menace walked away winners of the first Heartland division match.

Our first League Two game in California in two years – and it was a belter. A defensive battle for most of the match, the two teams were evenly matched for the entire game – until Marin FC Legends conceded a free kick in their own half with the seconds ticking down.

Project 51O’s Gabriel Bracken Serra stepped up to the ball, 28 yards out, and curled it into the top corner of the net, without a prayer of being saved. The match continued its standard defensive battling, and 51O was able to hold on to make that screamer the winning goal in the match. They get all three points in their inaugural match.

Our nightcap on Sunday was possibly the most entertaining match of the entire weekend. In a feisty Louisiana Derby, these two newcomers to League Two put on a show. Newly-formed LA Parish opened the scoring in the 34th minute with a score from the penalty spot, the lone goal in the first half.

The action was just getting started. In the 73rd minute, Parish shakes free again with a beautiful through ball, put away to double the visiting advantage. The young team was finding lanes to attack on the counter all match.

Just as it appeared Krewe had run out of time to get any points from the match, they began their comeback bid. A ball leaks through the Parish defense after a scrap in midfield, and Krewe pull one back to make it 2-1 in the 76th minute. In stoppage time, a similar sequence – Krewe find a numbers mismatch on the right wing, and put the ball over the line to level the match at 2-2.

The drama had still not reached its end. Just moments later, Krewe concede a penalty at the other end, and it looks as if Parish may steal three points back. Learning from experience, though, the hosts are able to parry the ball away and split the points in USL League Two’s first Louisiana derby.